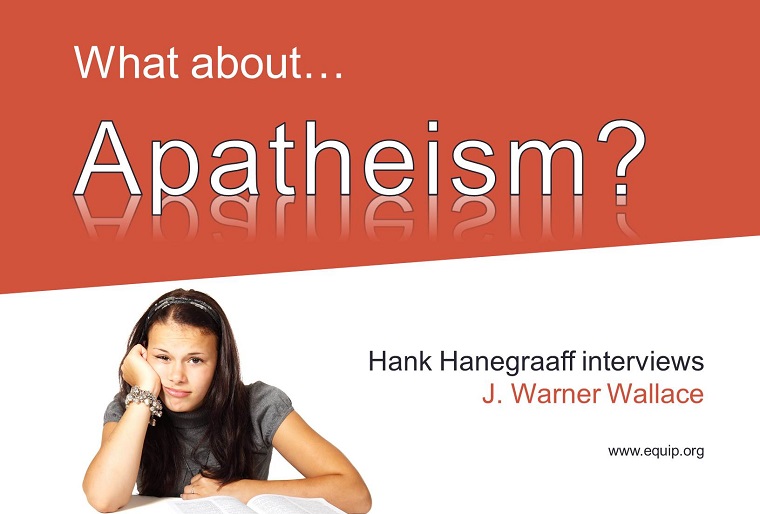 J. Warner Wallace is a Dateline-featured cold-case homicide detective, popular national speaker, and best-selling author. He continues to consult on cold-case investigations while serving as a Senior Fellow at the Colson Center for Christian Worldview. He is also an adjunct professorof apologetics at Biola University and a faculty member at Summit Ministries.

Before he became a popular apologist, Jim would listen to the Bible Answer Man broadcast in the car while working stakeouts as an undercover investigator. He has since masterfully melded his unique capabilities as a cold-case detective with his passion for Christian apologetics to provide believers and skeptics alike the tools and evidence to make the case for the Christian faith.

The following is a snapshot from a recent episode of Hank Unplugged, where Hank and Jim discussed apatheism.

Hank Hanegraaff: There is a new play on the word “atheism” called “apatheism”— the new apathy about God — which says God’s existence is not considered a relevant question. Seems that this is maybe as dangerous as atheism with respect to the gospel of Jesus Christ. Some people call it the power of meh. But this apatheism, this apathy, how do you shake people out of their lethargy?

J. Warner Wallace: I will tell you this: I am writing a book right now with Sean McDowell on how to teach Christian apologetics to Gen Z [Generation Z] because we do a lot of this either in a worldview conference or in a classroom setting. About 70 percent of our audiences are young people. I think that apathy is a far greater danger. It’s a far bigger hazard.

I remember I had a prosecutor whom I did most of my cold cases with whose name was John. He had a co-prosecutor named Ethan on several of our cases. They would come over to my house to prep a case, and I would be sitting for weeks with these two. Ethan and I would argue passionately. Ethan is a very adamant atheist, and we would get involved in an hour conversation at a time talking about theism — God’s existence. Meanwhile, John would get so upset that he would finally scream at Ethan and say, “Ethan, stop taking to Jim. He loves the fact that you’re interested. You need to be more like me. Jim knows I couldn’t care less about any of this stuff. So, he doesn’t talk to me about it. If you continue to show this kind of passion, he’s going to be talking to you about this all day, and we’re not going to get any work done.” So, he’d say, “You need to be more like me.” He is absolutely right. It was difficult to talk to John about these issues primarily because his apathy was paralyzing. He loves sports; but if I were going to talk to him about some small Division 5 team in some rural part of Wisconsin, he does not care. “Why should I care about that?” This is the way he saw the search for meaning and God. Why should I care about it?

I think apathy, and overcoming apathy, is a key to what we are going to have to face in the next generation with Gen Z. I think there are some strategies for this.

Look, no one is apathetic at a point of crisis. I do not have to worry about apathy in my victim families, for example. They are all passionately engaged in the process. They want to see justice. It turns out that apathy is that kind of thing milling around until the rubber meets the road. What we have to do is show our young people where and how the rubber meets the road. Where, how, and why this is so critical. A lot of this is going to come to them through narrative, by way of storytelling, by way of examples. They love examples. They love storytelling. We are going to have to tell the stories that amplify for them why they should care. They are probably going to be stories of tragedies, stories of crisis of meaning, or crisis of purpose. I think when we do that, it is not trying to falsely ignite a passion. This is where all apathy vanishes. It vanishes when somebody finally steals your car. It vanishes when someone finally, on the basis of a worldview you do not agree with, does something to harm you. This is where apathy vanishes.

I think in the end, we have to help ourselves. Let’s face it, if we are not modeling energy, passion, and interest, if we are not clearly passionate about what we believe, then good luck trying to transfer that to the people you’re working with, the young people you are leading. It is one thing to say, “I do not understand why anyone does not come to youth group.” Well, I am going to be honest. I am going to look and say first, “What does the leader look like? Is the leader passionate?” Passion is contagious. It is one of those things that is caught rather than taught. I think that is part of it, too.

There are several things we can do. For example, I noticed when I would start with young people, and I would say, “Hey, in eight weeks, we are going to the campus of UC Berkeley, because I want you to see what that campus is like, and I am going to put you on the campus at Berkeley, so you are going to have to witness and talk to students, most of whom are not going to be Christians or religious. I am going to give you some strategies. We are going to train you for eight weeks. We are also going to put you on stage where you are going to have a chance to debate with atheist speakers and atheist thinkers.” Suddenly, apathy is lifted. They want to go on the trip to Berkeley because it sounds exciting. So, they will go, but I have never returned with an apathetic student. Putting them in that hot seat is what ignited their passion to do it again. I also have never done a trip like that where it did not grow every year. If you went the first year, you wanted to go every year. So, I would have more and more students that I would be taking over the course of four or five years. Those kinds of trips put the rubber to the road, and that is where we see apathy go away.

Cold-Case Christianity: A Homicide Detective Investigates the Claims of the Gospels